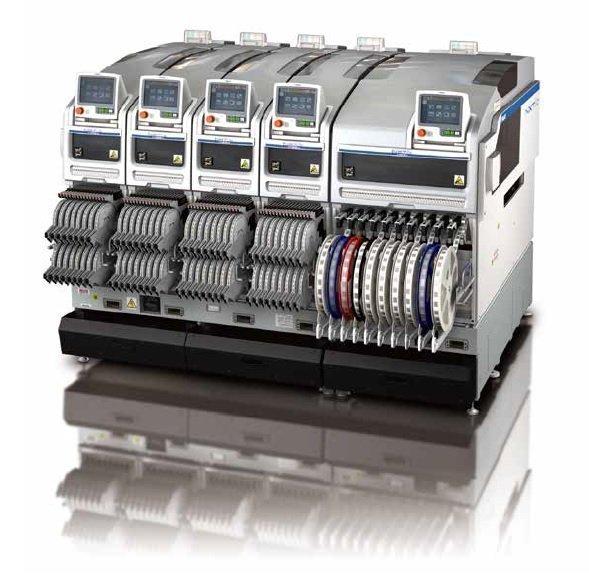 With the NXT III/IIIc, Fuji developed the 3rd generation of the highly successful NXT series, with more than 66,000 installed modules worldwide.

For multifunctional and high-performance electronics, such as in mobile phones and automotive applications, both the number of components to be assembled, as well as the possible functionalities further increased. Accordingly, the assembly density of tiny components increases sharply. On the other hand, requirements such as the assembly of shielding plates, components with a very small grid connection and components of package-on-package applications show the requirements for the functionality of assembly machines are becoming more and more demanding year after year.

The NXT III/IIIc has been designed as a scalable placement platform that delivers both high productivity and quality, which also meets the needs of future generations of components (such as 03015).

In addition, it ensures high compatibility with its predecessor NXT II. Many existing machine elements, such as placement heads, tray and feeder units, can be used even on the NXT III/IIIc.

By using the appropriate placement heads, each NXT III/IIIc module can be customized according to your production conditions. The NXT III/IIIc thus covers your entire component spectrum.

The platform allows not only assembly but also the integration of additional functions:

*Contact Fuji or sales agents for details regarding unit combinations and other detailed specifications.

This site uses cookies. By continuing to browse the site, you are agreeing to our use of cookies.

We may request cookies to be set on your device. We use cookies to let us know when you visit our websites, how you interact with us, to enrich your user experience, and to customize your relationship with our website.

Click on the different category headings to find out more. You can also change some of your preferences. Note that blocking some types of cookies may impact your experience on our websites and the services we are able to offer.

These cookies are strictly necessary to provide you with services available through our website and to use some of its features.

Because these cookies are strictly necessary to deliver the website, refuseing them will have impact how our site functions. You always can block or delete cookies by changing your browser settings and force blocking all cookies on this website. But this will always prompt you to accept/refuse cookies when revisiting our site.

We fully respect if you want to refuse cookies but to avoid asking you again and again kindly allow us to store a cookie for that. You are free to opt out any time or opt in for other cookies to get a better experience. If you refuse cookies we will remove all set cookies in our domain.

We provide you with a list of stored cookies on your computer in our domain so you can check what we stored. Due to security reasons we are not able to show or modify cookies from other domains. You can check these in your browser security settings.

We also use different external services like Google Webfonts, Google Maps, and external Video providers. Since these providers may collect personal data like your IP address we allow you to block them here. Please be aware that this might heavily reduce the functionality and appearance of our site. Changes will take effect once you reload the page.